The legendary Sensation returns to the Johan Cruijff ArenA in Amsterdam on July 2, 2022. The anticipation was already reaching the fever pitch, and now announcing world-class house artists for the likes of ACRAZE, Diplo & MK, Franky Rizardo, MALAA, Noizu, Oliver Heldens, and Sunnery James & Ryan Marciano will take the stage, tickets are set to fly out even faster. Sensation returns for the first time in 5 years to turn the Johan Cruijff ArenA into the world’s biggest club once again for its 133rd global edition. The Deluxe and Panorama Lounge tickets are completely sold out, fans can get a hold of the last remaining Regular tickets via www.sensation.com.

In alphabetical order in the main arena, Florida’s sensational ACRAZE leads the charge, who broke the UK Top 10 and reached #3 on the Billboard Dance Chart with the huge ‘Do It To It’. A truly unmissable back-to-back is in store between Diplo, who just released his acclaimed new self-titled album, and house legend MK and is sure to be an explosive meeting of minds. Dutch powerhouse Franky Rizardo, one of the country’s biggest house music exports, makes his long-awaited debut at Sensation after growing up going to many of their events.

The mighty Malaa represents France on the line-up—a favorite of Tchami’s and no stranger to the biggest festivals. The host with the most, Lee Grant, returns as the long-running ‘voice of Sensation’, while fast-rising star Noizu, a favorite of Skrillex’s and regular at huge events joins from Los Angeles. Industry heavy-weight Oliver Heldens—one of the biggest and best-loved producers in all of dance music—returns to Amsterdam following his huge ADE shows, and  hometown heroes and Sensation mainstays Sunnery James & Ryan Marciano complete the main arena line-up. Along with a very tasty line-up at the brand-new Silver Stage in the Deluxe area featuring Biscits, Dombresky, La Fuente, Martin Ikin, Mr. White, and RAYNOR, the event is shaping up to be one of the most exciting editions of Sensation to date. Expect the usual world-beating standard of production to give a feast for the eyes as well as the ears.

Sensation has been a groundbreaking event ever since its arrival on the scene in 2000, bringing a new level of production and sense of occasion to dance music with its breathtaking arena shows. The event has inspired generations of dance lovers, DJs, and producers, and continues to champion the brightest new talents. Hosting a spectacular show program, state-of-the-art stage designs, and immersive audio effects, Sensation 2022 is set to offer visitors an unparalleled evening. This year’s ‘YES.’ theme is dedicated to the emotion that lives among the nightlife crowd, calling on them to commemorate that positivity always wins and to celebrate life together.
The last remaining tickets to the event are available on www.sensation.com. 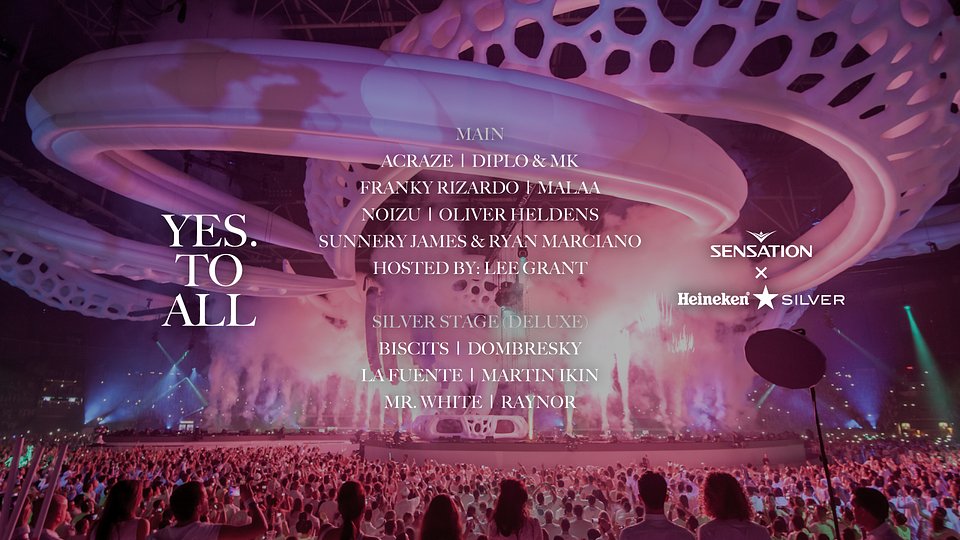