Julian Jordan talks with EDM TV about classmates, his rise and more

Julian Jordan is riding the crest of a wave, fresh from the World Club Dome stage in the Veltins Arena in Gelderkirchen he is sitting on the proverbial Cloud 9, and is absolutely famished. However even attempting to steal a few minutes for a quick meal proves somewhat difficult, as on at least four occasions during the quick absorbing of sustenance, he is approached (somewhat sheepishly) by adoring fans, desperate for a photograph, desperate for a quick reminder of an unforgettable night in Germany.

He obliges his fandom and in between obliges his hunger, it seems this is the life of a superstar DJ, but what goes through the mind of a DJ in the moments after stepping off a stage, after captivating 40,000 people, how do you climb down from the heavenly adrenaline rush?

Julian Jordan: “It’s strange, during the set, you’re always trying to live in the moment,” says the Dutch native; “like really enjoy every second, the energy from the crowd, you can feel it, but when it’s coming to an end, I’m like, whoah is that us coming to end of the set already.

He continues. “Stepping off the stage, I need about 10-15 minutes to try and let it sink in, to try and really understand what has just happened.”

Go hard or go home
Unlike in other countries, and festivals, there’s no gradual build up to the main event in Germany, the entire event is the main event, there’s no early mellow, the tagline, ‘Go Hard or Go Home’ is never more relevant than at a World Club Dome festival.

Laughing Julian says; “Yeah a lot of time you have to kind of build up the crowd, avoiding the big hard tracks too early, but over here, it’s big bangers, it’s go, go, go, that’s what they want, and I love it, the energy is always there. There’s never a head dip from the crowd, and there’s no need to instigate a clap, clap, clap, from the crowd. Half the time they’re instigating the clap and I’m simply joining in.”

Classmates
A classmate and close friend of current DJ Mag No.1 Martin Garrix, both have soared to the top ranks of the DJ industry, but back then sitting in class could they have ever predicted the level of success either one would achieve? From No.1 accolades to Las Vegas residencies (Julian has a residency at Omnia in Caesar’s Palace, arguably the most prestigious club on the whole strip), it must be like a walking dream.

Julian Jordan: “It’s so weird, I can remember us sending MSN Messenger comments to each other, sitting in the same class. Almost everybody on the stage tonight sat together in the same classroom. It was our teacher Mark Altman, without doubt one of the best producers I know. Technically, musically, he can produce everything, any genre and bring it together. We learned a lot from him. Literally my school class, in a sold out stadium, and every one of us playing. Super, super, strange.”

“Sometimes I just think, how has this happened, it’s still happening. I was just making music, decided to get a manager and then all of a sudden I got bookings I was like OK. Shit I’ve got to play music, shit I’ve got to play my first festival, and now it’s playing in huge stadiums. Sometimes I try not to think too hard about it, try not to look backward, only look forward.”

Meteoric Rise
It’s been a pretty meteoric rise for Julian, from being announced as MTV’s ‘One to Watch’, touring the world at 15 years old, including his own Vegas residency, headlining Electric Daisy Carnival, and most recently developing and releasing his own ‘Chasin’ fashion line. Surely nothing phases the 22 year old after everything he’s experienced? 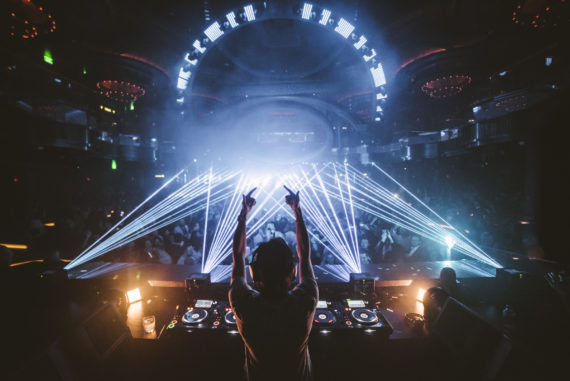 Reminiscing about the earliest days in his career Julian says; “It’s a different kind of nerves now, but I was definitely more nervous playing my first gigs to like 200 people. Back then you don’t have the experience to call upon, nothing to prepare you. Now it’s more about making sure your set is perfect, should I have played another track, should I have edited the intro differently, it’s a different kind of nerves, but it’s all experience.”

Laughing he continues; “My first gig was a Reggae loving school party in Holland, so I come with all these house tracks and after two songs I’ve got people coming up to me saying, ‘is this all you’ve got’? ‘No reggae’?

“I’m sure after answering ‘No’, the reply I received was ‘this sucks’. That’s quite the learning process.”